You know you are a social media expert if….

Social media is constantly changing and there is always going to be something new. Just because it is new, doesn’t mean its going to work either. Its fine to jump on the bandwagon and learn a new social network but to promote it too early wouldn’t be fair to whoever ends up using it thinking its going to be effective. There is a lot of wasted time in social media because people are either on the wrong social network, promoting to the wrong people, or using social media improperly. There isn’t a wrong way with social media, a strategy may work for someone, but it doesn’t mean it will work for everyone. There are a lot of best practices you can find online but take everything you see or hear with a grain of salt. You need to test and prove everything for yourself with your situation, product, industry, etc.

A social media expert is a really hard title to hang your hat on. I feel I know a TON about social media, and have been referred to as a social media expert at times but I feel I’m more of a social media enthusiast over anything else. I do join all the latest and greatest social networks when I can, I do try to participate and everything else. With my new role at Upright, I’m slightly removed from the day to day need of keeping up like I used to, but I still do it because its a passion. You can tell when someone really knows their stuff by digging deeper past the buzz words and the facade that people put on. 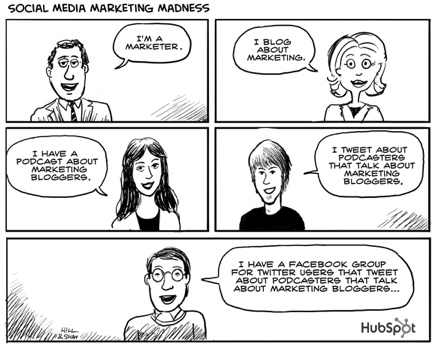 Bonus: A good friend of mine started an AWESOME hash tag on Twitter, right when I started writing this post. He has some hilarious tweets about the social media challenged. #youmightbeSMchallenged